Tatzu Nishi (b. 1960, Nagoya, Japan) is known internationally for his temporary works of art that transform our experience of monuments, statues, and architectural details. His installations give the public intimate access to aspects of our urban environment and at the same time radically alter our perceptions. For his first public project in the United States, Nishi has chosen to focus on the historic statue of Christopher Columbus.

The marble statue, which rises to more than 75 feet atop a granite column, was designed by the Italian sculptor Gaetano Russo. It was unveiled in 1892 to commemorate the 400th anniversary of Columbus’s first voyage to the Americas. Despite its prominent public location, the statue itself is little known, visible only as a silhouette against the sky or at a distance from surrounding buildings.

Nishi’s project re-imagines the colossal 13-foot-tall statue of Columbus standing in a fully furnished, modern living room. Featuring tables, chairs, couch, rug, and flat-screen television, the décor reflects the artist’s interpretation of contemporary New York style. He even designed wallpaper inspired by memories of American popular culture, having watched Hollywood movies and television as a child in Japan. Discovering Columbus offers both a unique perspective on a historical monument and a surreal experience of the sculpture in a new context. Allowing us to take a journey up six flights of stairs to a fictional living room, Tatzu Nishi invites us to discover for ourselves where the imagination may lead. 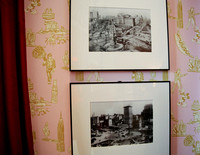