What a fabulous tour! A group of friends, dressed in vintage inspired outfits, gathered to take the Backstage Tour at the historic Radio City Music Hall.

From their website: The art deco tour is offered on select dates and takes guests through the innovative mind of interior designer Donald Deskey who incorporated his love for the 'new' art deco motif in an elaborate portfolio that garnered him the commission of a lifetime. His original 1932 furnishings have been expertly restored and adorn the public spaces and lounges of the Music Hall. The lounges of Radio City also house some very significant works of art by prominent artists Stuart Davis, Yasuo Kuniyoshi, Withold Gordon Henry Billings and Eduard Buk Ulreich and step inside the Roxy Suite, one of the few remaining spaces still intact, designed entirely by Donald Deskey himself.

Step back in time and capture the ambiance shared by Cary Grant, Katharine Hepburn, Alfred Hitchcock, Judy Garland, Vicente Minnelli and many more...
An independent designer named Donald Deskey decided to compete for the work. According to Deskey, Roxy Rothafel, the Music Hall's producer, wanted to decorate the Music Hall in the opulent "Rococo" style typical of large motion-picture theaters of the time. Deskey invested $5,000 in a spectacular presentation of the new Art Deco style that utilized glass, aluminum, chrome and geometric ornamentation, promising a modern theatre, unlike any other in New York. Deskey won the competition and was awarded the mammoth project of designing every public area in the Music Hall, including thirty lobby areas, smoking rooms, retiring rooms, foyers and lounges. He created a theatre that was unique in 1932 and remains unique-and spectacular-today! 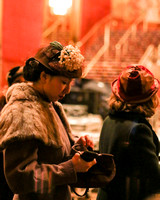