A group of us were fortunate to tour the exquisitely beautiful United Palace Theater, led by Mike Fitelson, the executive producer of the United Palace of Cultural Arts.

Built between 1925 and 1930, located at Broadway and 175th Street, New York City, the classic, architecturally grand structure is now an inter-cultural center for the arts. It was originally the Loew's 175th Street Theater, the last of the "Wonder Theaters", so named because of their extravagant design and because they housed the twin chamber, seven-story high Robert Morton Wonder organ. Extensive renovation under the direction of Reverend Dr. Frederick Eikerenkoetter, the vision of the architect, Thomas Lamb, has been restored to its original splendor and is mindfully maintained. Its architectural style has been classified as a monument to eclectic Orientalia with Moorish-Rococo influence. The interior is ornately decorated with filigreed walls and ceilings, illuminated with directional lighting from within and behind the walls. The original elegance has been enhanced by the addition authentic Louis XV and XVI furnishings and a collection of other works of art. The structure dominates the entire block bounded by 175th and 176th Streets, Wadsworth Avenue and Broadway.
For more information, please see here.

After the tour, we were treated to a fashion show presented by some of our own vintage clothing enthusiasts, and emceed by New York Post Editor Mackenzie Dawson. 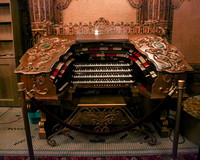 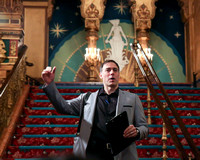