I had the great pleasure of ferrying across to Governor's Island for this wonderful event. Hosted by the World War One Centennial Committee for New York City and Governor's Island National Monument, living history reenactors brought World War One to Governors Island National Monument on Saturday and Sunday, Sept. 15 and 16, 2018. Reenactor volunteers represented the Allies and Central Powers—as well as civilians in 1918-era attire. On display they had historic weapons, vehicles, and other related military equipment used in WWI. Ebony Doughboy reenactors from the 369th represented the Harlem Hellfighters, 36th Infantry, who served under the French 4th.
This is a handful of images from one day - they have been purposefully processed to look dated. Another album of color images can be found on https://www.LynnRedmile.com/wwigovisland2018 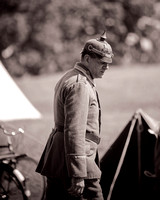 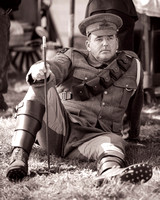